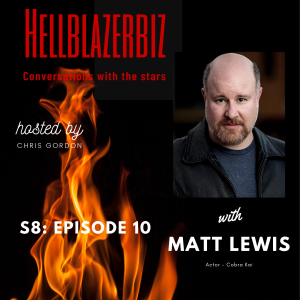 Matt Lewis is an extremely accomplished actor of both stage and screen as well as teaches the craft. Hehas appeared in many top shows, such as Dynasty, Ozark and the hit show taking the world by storm -Cobra Kai. In the latter, he plays Ron, the chairman of the All-Valley Karate Championship, made famous in 1984 in Karate Kid, where Daniel LaRusso (Ralph Macchio) had his decisive grand final win over Johnny Lawrence (William Zabka). Matt’s character is a beloved’ character who appeared in season 1 of the show and who is hoping to return. Matt is very passionate about the art and craft of acting in this excellent conversation.