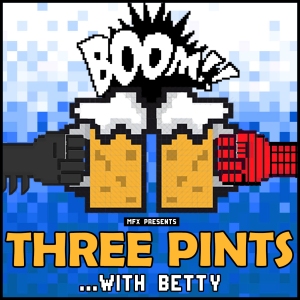 Welcome one and welcome all, the bar is open, the drinks are poured, so raise a glass and let’s get all fucked up on the biggest nerd news stories of the past couple of weeks. Join your heroes Duckman and Marc Abrigo as they give nerd news the full 3PB treatment. On the show this week…

Sometimes there’s a story told on a podcast that makes you laugh, cry and you will never forget for the rest of your life. This week, Marc Abrigo has one of those stories. It’s a tale of Fatman and Little Boy. It’s about poop. It’s beyond funny. Honestly, Duckman nearly died with laughter during this story.

After that it’s nerd news time. Spider-Man is back in the MCU! Woo hoo! The lads discuss this and give all the low down on what’s gone on and talk about the future for everyone’s favourite web slinger. The main main involved in all of this is of course Kevin Feige and Feige is also developing a new Star Wars movie. Marc, being the man in the know when it comes to all things Lucasfilms, gives his thoughts on this and the lads discuss future Star Wars projects.

It’s not all Disney owned franchise news this week though. Over at Warner Bros James Gunn has announced the cast for his Suicide Squad movie and the lads have a quick chat about this news and which actors could play certain characters in the Squad.

Warner Bros biggest movie of the year, Joker, is released this week and with all the controversy surrounding the movie’s release the lads discuss this and come to the conclusion that the problem isn’t a movie with violence or whatever, the problem is easy access to guns and no free mental health care in the US. It’s not fair to blame movies or video games for gun violence in society when such easy access to weapons of death is available.

There’s some chat about the news that Jurassic World 3 will include the original cast members from Jurassic Park and what this kind of nostalgia casting means for reboots and sequels. Plus there’s a fun little story to wrap the show up about a guy who took acid, went to Disneyland Paris and had a terrible time.

This is a super fun, news packed show that you really can’t afford to miss. So sit back, relax and enjoy a bit of 3PB in your life.

As always thanks for listening and be sure to get involved with the show through all the usual channels.